You know the feeling when you havn’t been kiting for a while and then suddenly a day come when there is sun and wind… lots of wind! You can’t wait to get your ass to the water and have an awesome session! That day came to me yesterday. The forecast looked very promising in the morning, perfect conditions! The forecast for the afternoon showed that you could expect some serious strong wind coming in… Unfortunately I had to be in the school from morning to 1 pm. So when I finally was home after school, I grabbed my gear and rushed to the bus. To get to my local kite spot from the town where I live you have to change bus in another small town. So I jumped off the bus in the other small town and waited for the second bus, that didn’t come! I waited for 20 minutes, then I called the bus company. I was told that the bus already had left. Impossible, since I was at the bus stop at least 3 minutes before the time that the bus were suppose to leave. I got pissed off! the buses from the second bus stop only go once per hour, so I had two options. Either wait for 40 minutes or start walking to the kitespot, a walk that would have taken at least one hour… Then I got this “brilliant” idea. Why not walk to water and simply ride with my kite to the kitespot. 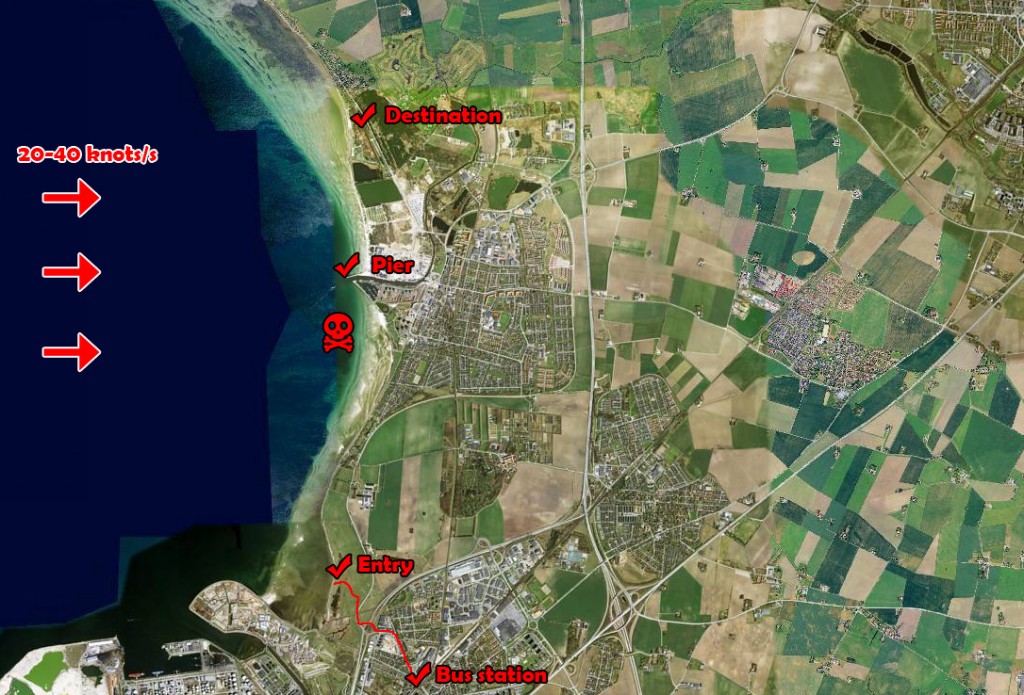 I started to walk. I reached the water about 15 minutes later, after crossing the highway and a field with fences and stinging nettles. 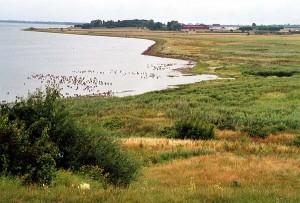 My plan was to perform a self launch with the kite, put my clothes and shoes in the kitebag and simply ride to the kitespot. So I rigged the kite and packed my bag. Everything was set! Only problem was that the wind was picking up and I could see some rain frontals out in the sea… I had to wait to a little bit. The front pasted and I saw my chance. I walked out in the water with the kite in my hand and my bag on my back. The self launch went well and I was up on the board, yeehaaa!

What I did not really take into account, or rather denied, was that I could get in trouble if the wind picked up a little… it was in my head of course, but it was a little too late to avert the insanity project… The problem was not only that the waves were pretty high and that the wind was strong and gusty. I could under no circumstances fall into the water since I had all my clothes in the bag on my back, including my iphone, keys, money, etc… The wind was so strong that the kite, a 9m Airush Varial X got bended and deformed due to the high wind pressure, though it was pumped to about 7.5 bar. When that happened, I had to bring down the kite to the surface and wait for the frontal to pass. I was on shallow water when this happened, so my bag was still quite dry. 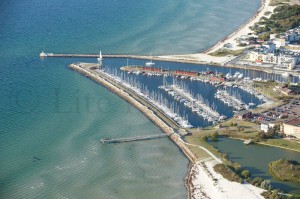 Anyway, I continued my ride and everything went ok, until I reached a bay where I was forced to ride out several hundred metres to be able to pass a pier and a small lighthouse. I struggled to ride upwind in 3 metres high waves and was finally far out enough to be able to try to pass the lighthouse. However, a big fucking rain cloud was coming in and I thought to myself that this is a very bad idea, but this has to make or break!
Then it happened… The frontal was right over me and the wind was so strong that the kite got deformed again. I tried my best to ride downwind through the huge waves in high 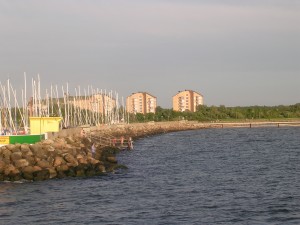 speed, but I had no chance to stay up on the board with the deformed and fully depowered above my head. I crashed into a wave and lost my board in the waves behind me. Trying to bodydrag upwind to reach the board would have been pointless in my situation, so I bodydragged downwind a few hundred meters until I reach the shallow water near the beach. I pulled the quick release and managed to reach my kite. I walked up on the beach and secured the kite with tons of sand. My board was lost in the ocean, but I figured that it would get washed ashore sooner or later. I was more worried about my bag, or rather all the stuff such as my iphone inside the bag, but it should be ok considering that I had put my iphone inside my jacket and the jacket inside a plastic bag. It is in this moment that it dawns on me, the bag is not on my back!!! I gaze out over the angry sea, but see nothing but water and waves… I also realize that one of my contact lenses is gone.
What to do now? Well, I got back in the water to search for my bag and my board. My worst fear was that the bag would have sunk to the bottom and I prayed to god that the pump still would be attached to the bag providing it with some buoyancy.

About an hour later I sight something black and round floating in the water, not to far from the beach, my bag!! Totally exhausted I waded through the water, up to the bag and lifted it up, what a feeling! I carried it back on land, like I was carrying a drowned person, the bag was safe! It turned out that one of the carrying straps had been ripped off when I crashed in the water and somehow it apperantly had slipped out from the other arm when I was tumbling around there for some seconds. Everything inside the bag was soaked, everything but a small piece of bread that was wrapped in a small plastic bag.

About 2 hours later I jump on a bus again, this time soaking wet and with an iphone that is completely dead!
I shake my head over my stupidity and I know that I only have myself to blame, but nothing bad without anything good. Now I have a good story to tell and the ground rule that you shouldn’t kite alone got another dimension for me. And hopefully some of you out there will learn something from a moron like me :)

Is it necessary to take a kitesurfing course? 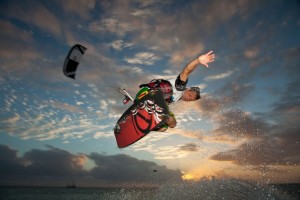 In my opinion the answer is, without doubt, YES! Kitesurfing is known as a hazardous extreme sport, which is both true and false. In the end it all comes down to in what way you decide to surf. One can stick to kitesurfing in safe conditions and in a safe way. What I mean by this is that if you only go out with your kite in light wind conditions and if you are happy with just cruising back and forth, then you don’t have anything to worry about. The power generated by the kite depends on the size and the wind speed. Double the size of the kite and you get twice the power. Double the wind speed and you can multiply the power by four. In other words, as long as you’re not overpowered you´re most probably fine even if you crash.
Safety equipment will also greatly improve your safety. Use of a helmet and an impact west while surfing in light wind is like driving your car 30 mph with seatbelt and airbags. You really have to be unlucky to get injured in these conditions.

So why are we told that kitesurfing is hazardous?

Kitesurfing invite the majority of all surfers to keep pushing their limits. You end up riding overpowered faster and faster, jumping higher and higher. It’s fun and also a great feeling to jump so it’s natural that we push the limits. But as you get more experienced you also learn to handle speed and power which in turn makes you a safer rider. So the fact that the water is filled with crazy kitesurfers can’t really be applied to number of injuries.

So when are people getting injured?

Some accidents happen when advanced riders are making tricks and skimp on safety. We all know that only geeks were helmets and it´s cool to show of your tricks near the beach in shallow water. Sometimes certain riders have to pay for this style with broken ankles and wrists and dislocated knees.
However the worst accidents are those on land… crashing in the water is one thing. The water damp your landing pretty good even in shallow water. But crashing straight down to the ground can fuck you up quite bad, you can even die if you’re unlucky and hit a stone, tree, building etc.
Many of the accidents on land happen due to carelessness and insufficient knowledge about safe kitesurfing, things that you learn when you take a course…

How can I avoid getting injured?

If you read everything above this line you probably understand that I advise everyone to take a kitesurfing course. You might have a buddy that can teach you, but that is not recommended. Imagine step into a gym for the first time in your life. Would you prefer to get a lesson in weight lifting from an instructor rather than having your friend telling you some “good tips”? Your buddy might be a good kitesurfer, but will most likely teach you how to kitesurf in a way that reflects his own experiences with kitesurfing. There is a good chance that he doesn’t point out the importance of how to use the safety system or show you how to launch and land in an inappropiate way or why you should avoid launching and landing behind sand dunes, hills, infront of obstacles etc.

For some good information on kitesurfing rules, equipment, hand signals, wind window eth. check out Gusty. Click on the links next to the girl.
This page also has some great information about kitesurfing kurs. It’s in swedish, but hey we all know how to use google translate, right? :)

Are you planning to take a kite course next season? Perhaps are you going to kitesurf in Sweden? There are some really nice spots in the southern part of Sweden, such as Habo Ljung, Falsterbo, Varberg, Höllviken, just to mention a few.

Perhaps are you a total beginner who is looking for a course or maybe would you like your girlfriend to start kitesurf as well?

If so, I would like to recommend Gusty, a kiteschool that is run by a nice guy called Gustav. I took my course through him this season and I’m very happy with his way to teach and a big plus is the delicious lunch that was included in the course.